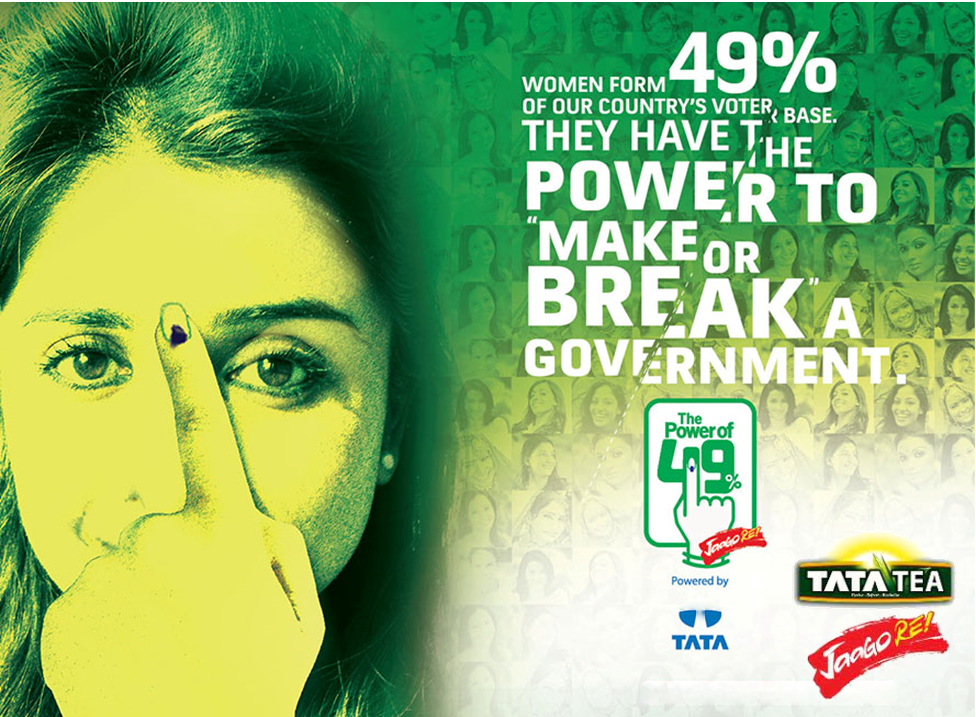 Brands With Values – How Tata Became a Market Leader

Tea is tea. So, how does a brand come from behind, nearly double its share and become the market leader in India, the world's second-largest tea-producing country? The surprising answer? By transforming itself into a “brand with values!" That is exactly what Tata Tea accomplished, beating Hindustan Lever (Unilever), the towering goliath twice its size in tea sales.

Historically, tea brands in India competed on their taste and flavor. But in 2007, Tata Tea changed all of that. It charged its ad agency, Lowe Lintas, to come up with a campaign that would connect with everybody – for in India, everybody drinks tea. Without it, the country could reasonably be expected to come to a screeching halt on all fronts.

After much research, Lintas stumbled upon a great insight. In India, there are many social injustices and widespread corruption, so much so that the average person has become apathetic to it. “Chalta hai” is a common refrain and translates roughly to “whatever!” It’s not that people aren’t deeply frustrated or don't care; they feel overwhelmed and helpless to change status quo. And it was in that simmering angst that Lintas saw their steaming cup of tea!

In 2007, Tata Tea launched its “Jaago Re” campaign. The words, which literally are a call "Hey! Wake up!" turned a cup of tea into a metaphor for urging people to "awaken" to their social responsibilities and not put up with corruption and injustice anymore. The first Jaago Re television spot urged the youth in India to awaken and rise to their duty of voting in elections (https://youtu.be/M5ECJrnqPcI) as only 9% of them actually did so.

It showed an unctuous candidate, who had spent a lifetime in politics, perfunctorily campaigning for votes in a neighborhood. He is unexpectedly accosted by a young man who presses him over a cup of tea to state his qualifications for the job of serving the nation. The steam from the tea cuts through the air like a blade and wipes the grin off the face of the blustery politician. The voiceover murmurs, "don't just wake up, jaago re (awaken!)” as a crescendo of baritone and gritty voices sings out the same phrase inspirationally.

Over the last fourteen years, "Jaago Re" has been repurposed to advocate for voting rights, gender equality, support sporting talent, and bring attention to corruption within the government. In 2017, ten years after the first ad, Tata Tea released its "Jaago Re 2.0," which shifted its focus onto "pre-activism," urging people to act proactively, before events turned into crises. For example, during the novel coronavirus pandemic, Tata Tea launched a campaign to bring attention to the struggling elderly care industry and promote the COVID-19 vaccination across the country.

As we have said before, it isn't easy to be a brand with values without the company itself deeply committing its mission to the same. It cannot just be a passing campaign. The values must be enmeshed in the company’s roots – without which it risks becoming a farce.

The Tata family has a long history of social activism, starting from the very birth of the nation in 1947. The company’s founder and patriarch, Jamshedji Tata, was one of the greatest philanthropists of all time and the fledgling nation leaned on him heavily to get nascent industries on their feet.

Puneet Das, SVP of beverage marketing for Tata Consumer Products, puts it well when he said, "As a part of the Tata Group, we stand for taking care of society while running a business … our ethos is ‘for the better’ – to make better products that make life better. So Jaago Re fits well with that ethos. … You need to put the consumer at the centre and understand how the purpose is benefiting (them), … The brand needs to take a back seat and the philosophy must be up front. That is what will give (the campaign) longevity and consistency.”

Some have described Tata Tea as "a brand that woke up India.” And when you wake up a billion citizens in a country like India, it is no surprise that you take the market by storm.

Companies that choose to have brands that become “brands of values” must start with a set of ideals they deeply believe in. Every brand of values takes flak from its own loyalists from time to time if it is seen as straying even modestly from its commitment. Additionally, the values must be broad and resilient enough to be relevant over decades as society evolves to remain relevant. And finally, the companies leaders must be seen as living to the ideals – as the brand, the company and its executives all become one when you have brand of values.

3. “Brand in action: How Tata Tea issued a ‘Wake up’ call to highlight national issues,” WARC